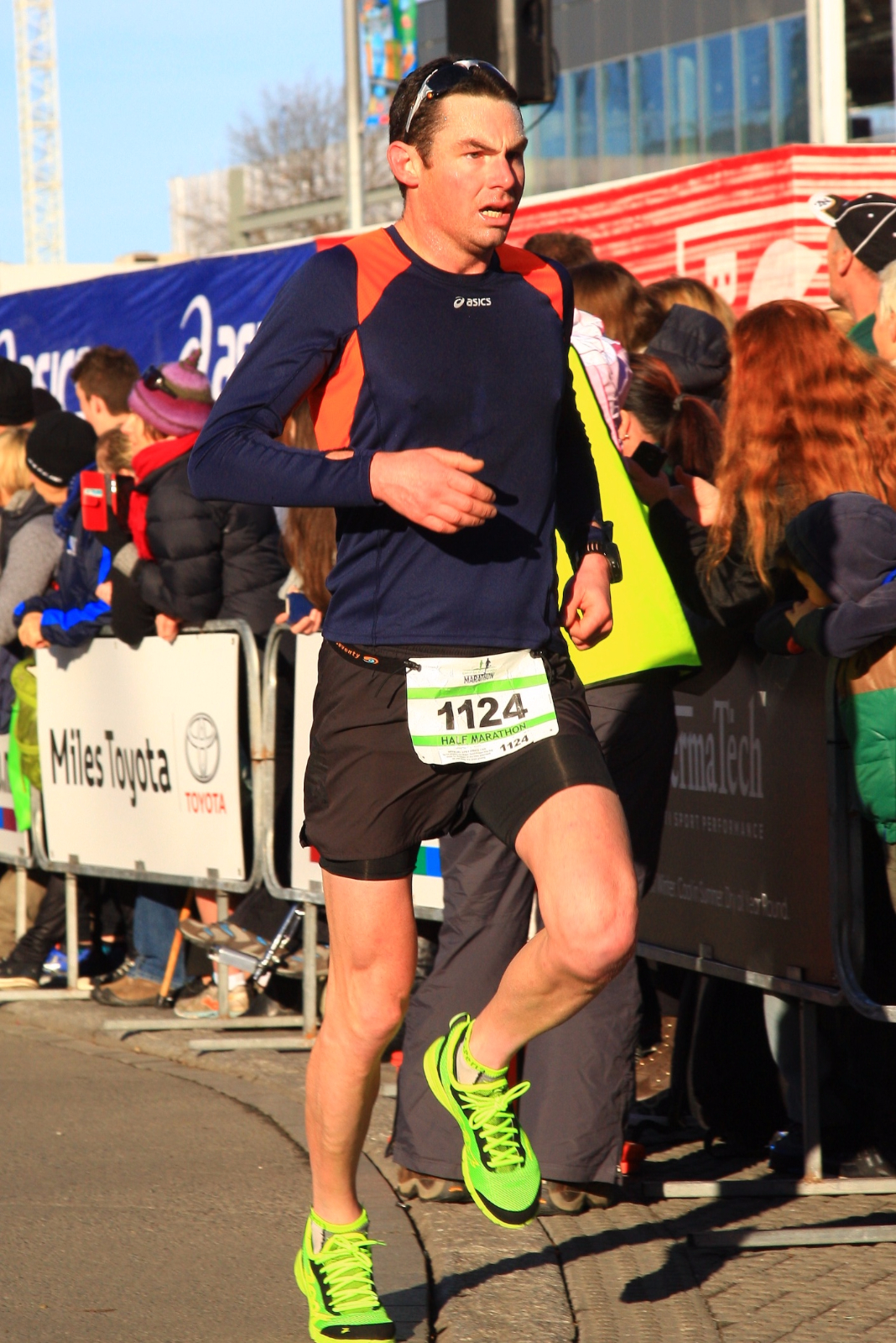 Gerard is training hard as he prepares for the World 70.3 Triathlon Championships, this involves swimming 1900m then cycling 90km prior to finishing with a half marathon. As part of his goal setting for the world champs he set a number of goals, one of which was to run sub 1:20hr for a half marathon. We targeted the Christchurch Half Marathon to achieve this goal. This is his story about how it went for him:

Before the start of my current training season I set a goal of running a sub 1hr 20 half marathon which is a reduction of 2 minutes from my current PB at the time. Leading up to the goal race I had chosen to try and achieve this goal I was seeing good improvements in my 10km time but was anxious that the average pace I was running through this was the same pace I need to hold for twice the distance at the half marathon. It was important at this time to keep a positive outlook and back my abilities. I had a good boost of confidence just prior to the event when doing a training session when I struggled to run slow enough to stay in the prescribed training zone. I feel that its important to recognise these moments within training and use it to boost confidence.

Before a goal event I avoid putting undue pressure on myself by only sharing my goal with the people closest to me as I find that announcing the goal to a wide audience then means the pressure to achieve is even greater. I always go into an event with the goal in the back of my mind but every km is a goal on its own. I find goals within the goal are important to prevent getting overwhelmed. I ran the race km by km and each km assessed how I was feeling, was I overreaching my ability. I do a lot of maths when I race and even when I’m feeling really good I start working out contingency plans and the slowest pace I can afford should things go wrong and still achieve the goal. I was lucky on this occasion as fatigue did set in that I had a buffer of being a minute ahead of what I needed and was able to concentrate on just holding a slower pace and not panicking. Through these techniques and some others I use I was able to hold on and take 2 and a half minutes off my previous PB and achieve my goal.

Gerard finished the Christchurch Half Marathon with a official time of 1:19:43 bettering his previous PB and going under the challenging 1:20hr time.

As most of you know Coach Ray has been trying to get under 3hr for the marathon for a wee while. This goal started when I finished in 2nd place in the Wairarapa Marathon with a 3:09 back in 2006. Finishing strongly I overtook runners from the lead group as they faded. I’ve had the wheels fall off spectacularly with a few attempts of a sub 3hr when I wasn’t fit enough (and knew it) to achieve it. 2014 saw two serious attempts at running it, achieving a 3:04 on very icy morning at the Christchurch marathon, then against a roaring southerly missed it by only 20 seconds at the Dunedin marathon. My build up to this years Christchurch marathon has been nearly perfect. Here is the story of how my event unfolded:

With the course being moved back to the city centre for the first time since the earthquakes, it involved two laps that started and finished in the square and took in Hagley Park, new construction and current demolition (running four times past the old Police station that was due to be imploded that afternoon), as well as heading through aspects of the red zone that with the houses gone looked very rural despite being what was a residential area. It was a flat fast course that the Christchurch marathon has always been known for and a great place to achieve my sub three goal.

The layout of the start area caused some teething problems. To avoid missing the start, a large number of late comers forced their way into the starting chute and I consequently found myself stuck behind a large number of walkers and slower runners. Although less than optimal it wasn’t the end of the world and Leroy (a Navy Physical Training Instructor friend who was also aiming for a sub three) & I stayed calm not over exerting ourselves as we moved through the field. To run a sub three it means running a 4:16 pace for each and every kilometre. Having to run through everyone meant we took over 6 minutes to get to the 1km mark. We slowly built our pace as we got a clear path ahead of us and eventually settled into the pace that we needed to be running.

We cruised through the first lap with the intention of running a negative split (running the second half faster than the first). A 1:31 half marathon followed by a 1:29 second half was the plan. As we crossed the halfway mark we had taken 1:34 which was basically our pace with how much we got held up in the first few kilometres. Although frustrated we were still calm and had plenty of running in our legs and 21 kilometres to ‘catch up’ our pace. As we rounded towards Hagley Park we knew the last safe point to pick things up was the far side where we would need to run at 4:00/km pace all the way home. Both of us had the fitness to do so, so we took the next kilometre to fuel up for a very HARD last hour. When that time came, neither of us had the kick left in our legs to run that pace.

I left Leroy behind, as he didn’t want to hold me up. I felt bad doing so as I wanted to cross the line in 2:59 with him but it wasn’t to be for either of us. I set my sights on the runner ahead and chased them down. Then set my sights on the next runner and so on. I only had one person catch me and pass me all race. I ran with him to keep him going towards his PB and at one point had a few runners we picked up into a group that wanted to go under 3:15. One guy when he was in his early twenties had ran under 33 minutes for 10km, but then he gained 20kg and in his forties now has rediscovered running and this was his second marathon. In the last ten kilometres I had some great support from friends and family that really lifted my spirits, this was perfectly timed.

Although I didn’t achieve my sub three goal, I was still happy with my running. Although I didn’t have the kick in my legs to lift my pace my 3:13 was still a respectable time. Two guys I ran with found me after the finish to thank me for picking them up and getting them to the finish in a PB, and Leroy also got his Marathon PB. So all in all it was a successful marathon, although I was unsuccessful at achieving my main goal for the event.

In contrast to Gerard, I very publicly announced my race goal. This gave me focus with my training literally forcing me to get out the door for my training sessions. When it was raining hard or frigidly cold I felt motivated knowing I had the pressure of all my clients and a large number of friends following my progress, or lack of if I was lazy and didn’t do my training.

4 weeks of training is all you need to do to destroy your current FTP significantly. On the average following, this programme cyclists improve by 8% in the first month.
Some people have improved by more than 40 Watts following this programme!!!
Designed for Cyclists of ALL abilities who are wanting to improve their FTP, the primary goal of this training plan is to make you FASTER. Chose the programme based on your ability. This programme is for cyclists that are comfortable riding between 40min and 1:20 hours in duration and want three sessions per week.