Ray Boardman Posted on June 19, 2017
515km over 3 days
An extreme event strictly for triathletes seeking a tougher challenge. Day 1, a 10 km swim and 140km cycle; Day 2, a 281km cycle; Day 3, an 84km double marathon – madness!
‘UltraHumps’ John (Humps) Humphries returned to Ultraman Australia in Noosa, Queensland over the period 13-15 May 2017. This year there was an increase to 54 competitors, most of whom were from Australia but also included athletes from Italy, Ireland, Brazil, USA, Poland, Portugal, India and New Zealand. Humps continued to use the event as a fundraiser for the Fallen Heroes of the New Zealand Defence Force. Due to NZDF commitments, his usual support crew was reduced to Derrick McMillan along with daughter Sarah. His coach Ray Boardman coached from afar through daily skype meetings and 13 year old local surf lifesaver Lily also returned as Humps paddler.
Once again ASA did not hesitate to step forward as a sponsor, providing two 4WD vehicles, fuel and some supplies for the UltraHumps team. Additionally, CEO, Gavin Torrens gave approval for Debs Pohatu and I to join the team as both support crew and pacers.
Humps, Sarah and I were the advance party, sorting registration and conducting preparatory activities such as orientation and Derrick and Debs joined us prior to start day. I can verify the extreme nature of the event simply by saying I got tired just driving the course! I dreaded Humps undertaking and whilst I may have thought he was a crazy old fool, I had nothing but respect and admiration for these extremist athletes who are able to punish their bodies beyond limits and recover enough to do it all again the very next day.
Day 1.
The swim section was a bit hilarious. Competitors were required to swim out to the start line, then an Indian competitor returned to shore to pick up his goggles that he forgot! We learnt later that he had to borrow a wetsuit as he had left his behind. It didn’t quite fit and after a few kilometres he stripped it off and continued without it.  The first competitor ever to swim without a suit!
The water looked flat to spectators but we were assured by the competitors that underneath it was actually rough and a hard slog.  Two competitors failed to finish due to sea sickness. The paddlers job is to keep competitors on course and fed during the swim. Now and then Humps would go off course and not listen to Lily’s instructions so she would just drive her board into him to correct his direction. She didn’t realise that he couldn’t actually hear her!  A couple of times Humps swam into the markers because Lily was busy having her own feed.  At least the knocks to the head kept him awake!
The bike section seemed pretty straight forward for Humps and he appeared to complete it with ease and all smiles. It was also our time to step up and support him by leap frogging and providing his nourishment.  This consisted of a rotation of bananas, boiled eggs, honey sandwiches, chicken, sausage rolls, chocolates and a range of fluids. We also provided cheers (jeers) of encouragement and hooted at every opportunity with our newly purchased bike hooter. Humps hated the hooter so much it probably made him go faster just to get away from it!
Day 2.

Another early morning start and a long gruelling day but Humps was still smiling throughout. The professional cyclists ate up the course however two competitors unfortunately crashed as likely a result of the combination of too much speed and a lack of concentration. They had severe injuries that required hospitalisation but were released later in the day. Humps had his own battles with a small number of competitors passing each other every time they had maintenance stops for either the bike or themselves.  The NZ flag came in handy for shielding him when taking a leak on the side of the road!

There was a lot of camaraderie amongst the support crews, helping each other where possible.  One competitor needed a new wheel and as her support crew were not in the vicinity, another crew didn’t hesitate to offer one of theirs. Our hooter came into its own. Everyone knew when the Kiwis were around.  We were heard before we were seen! Humps completed the ride still smiling and in good nick until he got into the ice bath.  He didn’t need a hand getting out of it!
Day 3.

Having weighed up our limitations of age, injury and illness of our motley support crew, we determined a pacing plan for Humps. We would pace on the return leg, believing he would be fine for the first 42 km. As always, nothing goes to plan and both Derrick and Debs were soon pounding the footpath alongside Humps at the latter stage of the first half. By the time we had hit the turn around point, Humps smile was well and truly gone and he was a grumpy, mean bastard!
Debs quite rightly determined that if he was swearing, it indicated he was OK. If he was saying nothing, then we had a problem. Humps legs were lead stumps and he was in pain, so our plan changed to just talk crap to keep his mind off it (where possible). Derrick tried his best to schedule our pacing but that soon turned to custard.  Sarah was worried her dad was overdoing it and we didn’t have a defib; and Debs felt the same with myself (bloody hardcase crew we were)! And who do we run into 2 kms short of the finish – Blair Gawler, shirt off and sunbathing by the footpath. A much welcome mate who didn’t hesitate to join us in getting Humps to the finish line.
Needless to say, the end (and qualification) was a welcome relief for all, especially the return of Humps smile soon after. The old fool did it again and deserves the congratulations of his family and the NZDF. Debs and I and our company ASA, were again honoured to assist Humps and be associated with Ultraman Australia.
I did ask Humps if he was going to return next year and he stated he would think about it, which to me means he will. So, for NZDF Command, warning order – Humps ‘original’ support crew needs leave, accommodation, travel, etc for Ultraman Australia 2018! As we said last year mate, whatever happens, ASA will support you – cheers UltraHumps.
– Himiona ‘Po‘ Pohatu 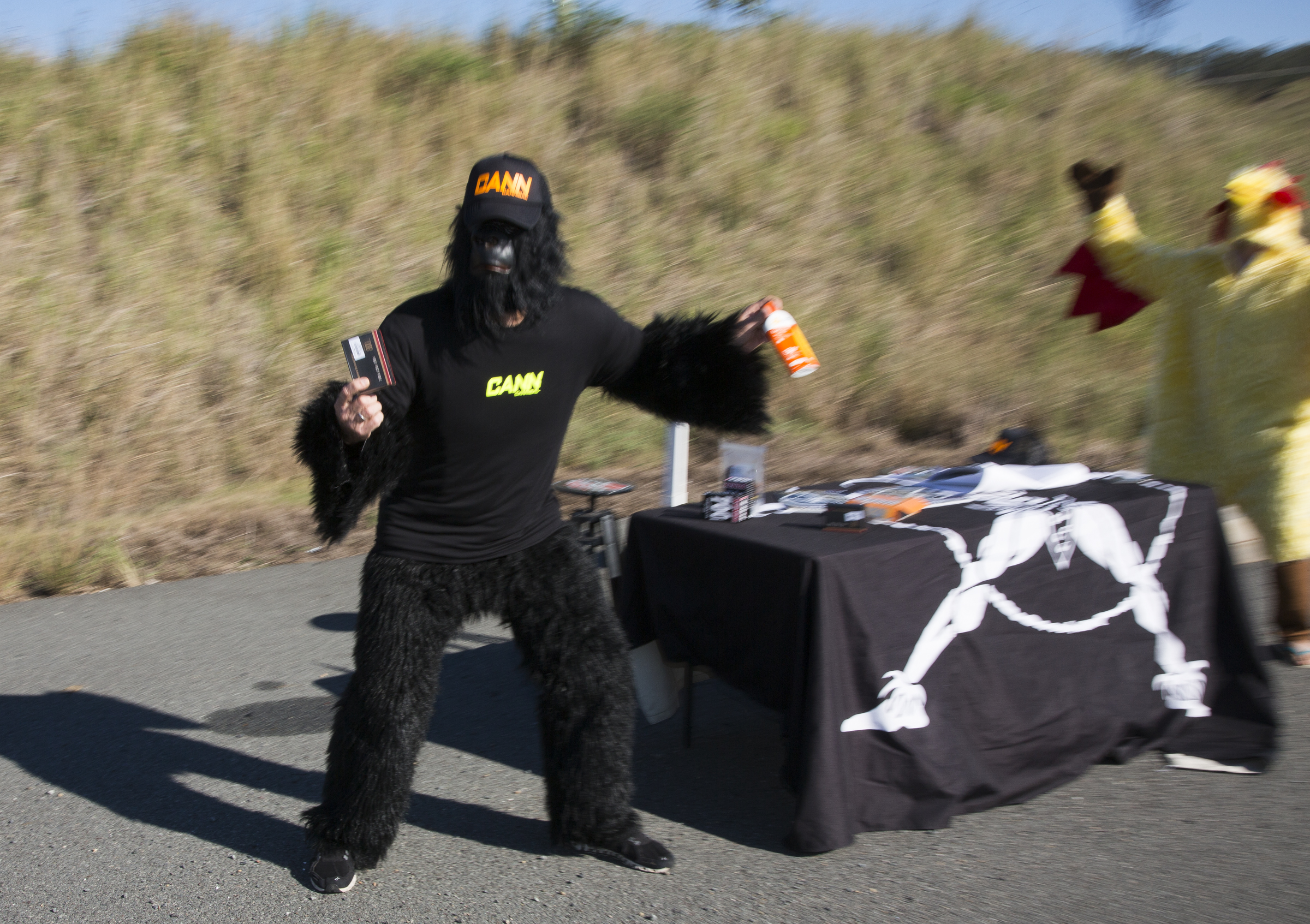 UltraHumps: The Funny Side of UltraMan 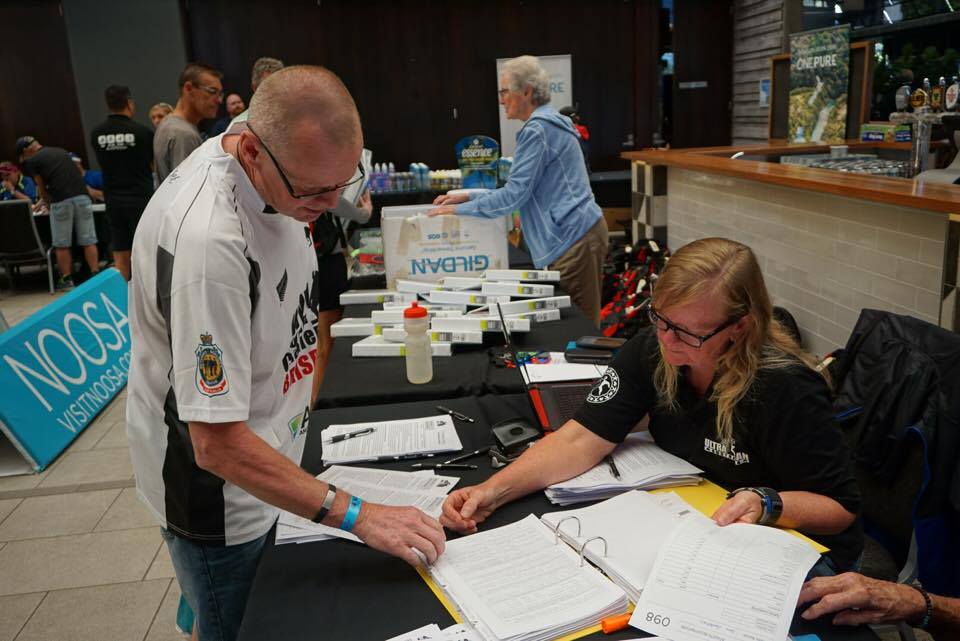