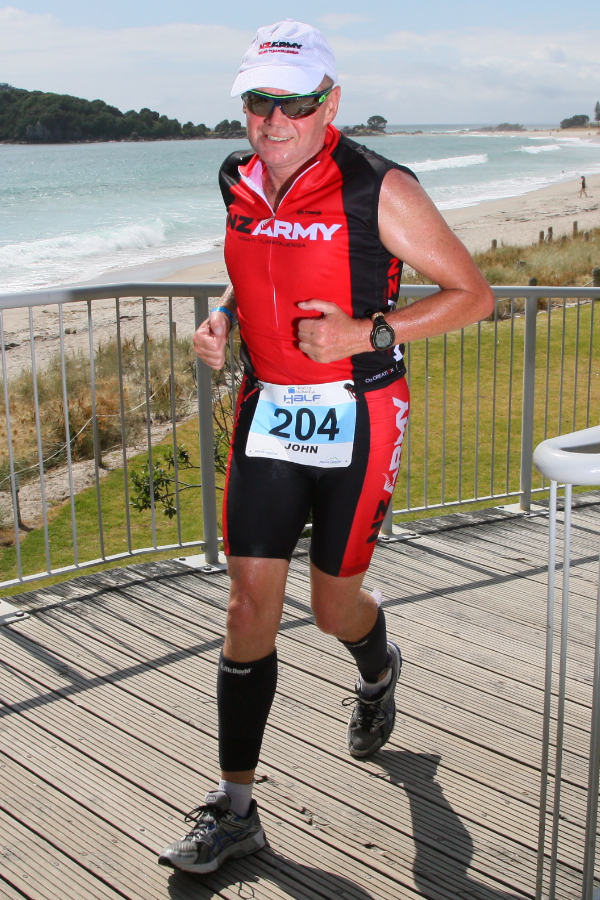 I was posted to Timor-Leste with the NZ Army and had completed three Ironman events where I completely self-coached with no idea what I was doing and finishing results that said as much.  Two of these events I had trained and competed in whilst on holiday leave from Timor.  I quickly realised that if I wanted to be committed to the sport that had changed my life around, I needed to take it seriously and sign up with a coach.  There are plenty of coaches to look for on-line or cheekily obtain a training programme on-line, but I had already made up my mind that Ray Boardman was the coach I wanted from Qwik Kiwi. On my last Ironman event in Taupo in 2014, Ray was on the course providing guidance to his clients, but he saw me struggling as an Army colleague and provided motivation and support to get me through.  Whilst we were both in the Army, he was in Taupo for his clients, but took the opportunity to ensure I was okay, hence when seeking a coach, I knew I didn’t have far to look and have absolutely no regrets.

To this day, I wonder who had the biggest challenge.  Myself being trained or Ray working out how to train me with the limited resources in Timor-Leste.

Swimming in open water was completely off the cards, as crocodiles are part of their spiritual culture in that part of the world and I saw enough of them to deter me.  Swimming pools were the only option and I had two to choose from which were a shocker.  The largest was just over 22 metres, had no lanes or black lines and the local population were amazed at a foreigner swimming backwards and forwards, to the point of constantly standing in your way watching and laughing when attempting to clock up lengths or doing drills that Ray had put in the training programme.  The other swimming pool was just over 17 metres and whilst this was a residence pool only, I sure as hell got really good at tumble turns but felt the problems of training in such a short pool.

Cycling was also problematic. Let’s just say the locals don’t have any form of driver testing for their license, so it was risky business at the best of times.  The safest day would be on a Sunday when the roads were quieter but even then the state of roads would destroy a road bike.  Riding in the dark hours wouldn’t work as the locals sometimes drive without lights on (or their lights didn’t work).  So instead of the risk, my training was purely on my LeMond Revolution Exercycle.  The long periods on the Exercycle that Ray had planned for my end goal of an Ironman I dreaded, but I knew they had to be done. I did get to watch a lot of DVD’s though.

Running.   If you think cycling sounded bad, running was chaotic if not funny.  Running was always early in the morning to avoid the humidity and heat of the day in Timor-Leste, but the hazards came with dodging taxis, motorbikes, buffalo, pigs, goats and dogs, but the worse was to come when I was even chased by a group of wild monkeys with their fangs showing (a Rabbies shot waiting to happen), and once running and coming across a wide-eyed crocodile, which between the monkeys and the crocodiles was great for sprint training.  A treadmill wasn’t an option as the only ones I could find looked like they were designed for a child, so I took the risk and hit the roads, but with caution!

So whilst I was still in Timor, I knew that with coming home in December, I would have about 10 weeks before the NZ Ironman in Taupo, so Ray and I considered events in January 2015, with the Port of Tauranga Half Ironman as the first event on the calendar.  Unfortunately, I arrived in New Zealand straight into a family wedding followed by the usual Christmas activities and didn’t have access to my event cycle, so it was a continuum of the dreaded Exercycle, but decent swimming pools and roads to run on.

Heading to Tauranga I gained access to my event bike 24 hours before the Port of Tauranga Half Ironman.  I had a quick ride of 30 minutes to get used to the gears etc and I checked my bike in after Registration.

The day started well with the 2 km swim, then I headed out onto the bike leg with the unusual January rain kicking in right on cue.  The bike leg was certainly different to an Exercycle with wind and the wet surface on the roads throughout various stages of the two lap circuit on the 90 km course.  The Tauranga sun and heat came out right on cue also for the run leg.  I hadn’t practiced much running due to a reoccurring calf strain but it held out great for the Half Marathon, but with little running from bike training I certainly felt it in my legs for the run.

My time was 6 hrs 19 mins for the 2 km Swim, 90 km Cycle and Half Marathon Run, which I was pretty happy with, all things considered.  Many thanks to my Coach Ray Boardman from Qwik Kiwi, his support for my weird and wonderful training options with the limited resources Timor-Leste had to offer were second to none.  He was great and will continue to be my coach for many events to come.

One Reply to “From Timor to Tauranga”